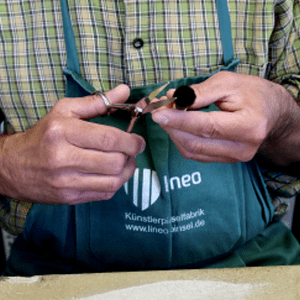 The history of making paint brushes

Art has been a part of human life for thousands of years. It is therefore no surprise that the brush is one of mankind’s oldest tools. Artist brushes, similar to today’s brushes were already used by man in the stone-age. Brushes as we know them today are made of natural or synthetic hair. The history and development of brush-making is long. The materials used and the brushes shapes changed over time and got more and more specialized.

Humans used brushes for cave paintings as far back as the Stone Age. The created work of art can be admired until today. The paintings in the cave of Altamira in Spain, are one of the most famous examples. They were created between 16,500 and 13,000 before Christ. Even then, people already knew different painting techniques and knew how to draw in perspective. Their aim was to depict the appearance and behaviour of animals in a lifelike manner. Therefore, these works can already be explicitly referred to as painting in today’s understanding. For the application of paint, the first brushes were used in addition to hands, branches and tubes. The oldest brushes that have been found, were made of feathers and animal hair tied to branches and animal hair stuck into hollow bones.

The evolution of brush shapes

Arts and cultures have changed a lot over time. Accordingly, the most important tool used by artists has also changed and evolved. The brush as we know it today has helped shape centuries of human history and culture. Today there is hardly a person who has never held a brush in their hand.

In ancient times, brushes were almost used worldwide. In China, brushes were developed early on for writing the complex characters. Characteristic for these writing brushes was their long hair. The history of this kind of artist brush can be traced back at least 6,000 years. Until today, brushes of this type are still used for writing and calligraphy. The Egyptians use frayed papyrus for drawing, painting and decorating their palaces, temples and tombs. There are written records from the Greeks and Romans that precisely describe how to make brushes.

The production of brushes was further developed in the Middle Ages. At that time, brushes were produced by monks in monasteries.

In the 15th century, brushes were preferably made of animal hair and quills. Soft hair or bristles were inserted into the quills. Due to the natural shape of the quills, these brushes could only be round. Their shape would accompany the art world for hundreds of years.

Until the end of the 17th century, brushes were made by artists and their apprentices themselves. The profession of the brush maker was finally established in the 18th century. Since then the painter’s most important tool, the brush, has been made by them. It was the brush makers who would experiment with different materials for and finally invented the metal ferrule. Thus, the round brush was joined by flat brushes and other special shapes. This also enabled the art world to further develop in its variety.

Round brushes and flat brushes still represent the basic shape of brushes today. Other special shapes are always based on round and flat brushes. They are being used depending on the painting technique or the color to achieve the most diverse effects.

Hair types being used for brush-making

As different as the shapes of the brushes are, as different are the materials that are being used for them. The type of the natural hair is always based on the area of application, the colors and the surfaces.

Hog bristle has been one of the first hairs that have been used for brush production because of its characteristics. Until today it is one of the most commonly used hairs. It is extremely resistant and durable. Brushes made with hog bristle have a remarkable ability to absorb paint. This is because of the unique structure of the bristle. Other natural hair types used for brush-making come from squirrels (squirrel hair), badgers, horses, oxen, goats and other animals. Besides natural hair, more and more synthetic hair is being used to produce brushes. Among the best synthetic materials are Toray and KONEX. However, the highest quality artist brushes are still made of red sable hair. The hair from the tail of the Siberian Kolinsky sable is the most valuable one. It has wonderful painting qualities and is extremely durable. Thus it gives you as an artist a very long-lasting joy in painting.

The profession of the brush maker

The profession of the brush maker goes back to the 18th century. The region around Bechhofen in Middle Franconia (Germany) can be referred to as the European centre of the brush making. Over centuries the craftmanship of brush making has further been developed and know-how has been accumulating brush makers in this region. Important values are tradition and a high quality standard.

The only vocational school for brush makers and the German Brush Museum are also located in Bechhofen. The museum is home to a unique collection of brushes and it’s dedicated to their history and the evolution of brush making. Unique in Europe!

What is quite interesting in times of digitalization and automation is that the best brushes are still made by hand. This already makes the brush itself a true masterpiece.

Spread your passion for art!